Last November Rob called me with some great news. Someone at work had moved, leaving an office open and available for the taking. Rob jumped on the chance and started working in it right away, staking his claim before clearing it with anyone. After a couple of days of camping out in it he got approval and now he has four walls and a closing door. How exciting!

One of the first things that popped in my head when I heard the news was, “Ooh, can we decorate it?!”

Rob initially didn’t think decorating was necessary even though he is working in that box all day, every day. He should feel good and comfortable and confident, right? And how could you possibly feel those things when you’re trapped somewhere that looks like this?

I mean, it’s not Aleppo or anything so I suppose it could be worse…but it could also be a whole lot better.

Ideas swirled. Initially I was thinking of a midcentury engineering office look (slide rules, perpetual desktop calendar, wire basket full of rolled-up plans) as ode to Rob’s grandfather. Max Williams was a water engineer back in the heyday when engineers ruled the world and every mother wanted her son to grow up to be one. He travelled the world getting pipes and damns up and running in places that had never before had them (Iran, Indonesia, etc.). Grandpa Williams inspired Rob to become an engineer himself so Rob keeps grandpa’s name plate, engineering stamps, and his vintage survey level on display as an ode to his legacy. 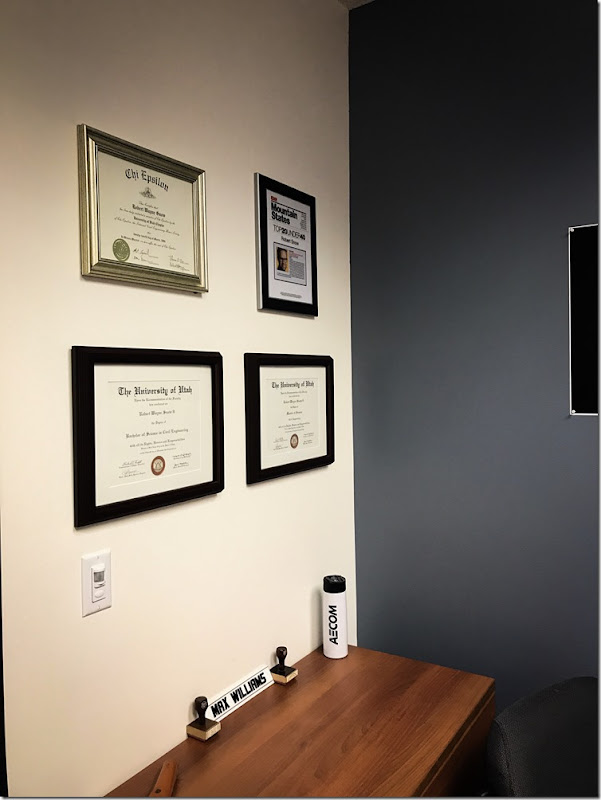 Anyway, as much as Rob loves his grandfather he wasn’t feeling the midcentury vibe. It just isn’t him enough and that’s fair. My next idea was one that he got excited about. SPACE! Since Rob’s a space and sci-fi nut (with a dash of fantasy) we decided to head that route.

Now, only a few of the offices in his building are “decorated” and the ones that are simply have one wall painted and that’s about it. We pushed the envelope and painted two walls. Rob chose the daring color. Since these pics were taken on two different phones on different days, the paint color doesn’t match. In person the color is more mid-dark blue with a hint of gray. Also, the furniture isn’t so glaringly orange. Dumb phone camera pics that are hard to edit properly…

The lamp was left in the office from its last inhabitant and Rob decided he really like its warm, homey glow so it stayed. We both loved the modern, spacey look of his new clock. The globe was mine when I was a kid and works perfectly here. I helped him arrange the stuff on his bookshelf, including the vintage brass train/boat lights and a concrete core and a basalt core among other random things. He keeps drumstick pencils on his desk. Someone shamefully swapped his large tree for a small plant on the floor by the window. 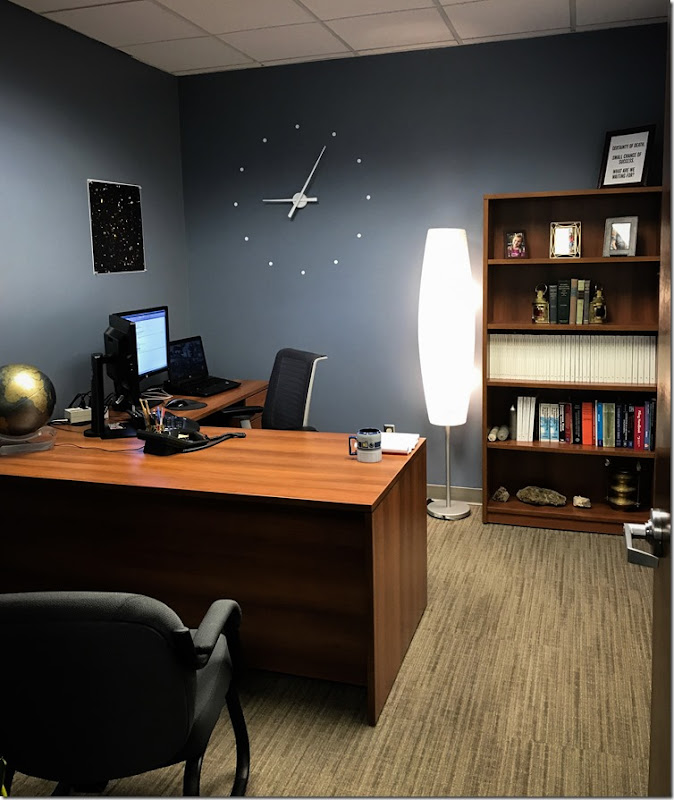 To add his personality into the decor, I suggested we scatter memorabilia from his favorite movies around the place. He’s got:

He rounded out the casual, “not-too-decorated” wall decor with two of his favorite space pictures. The eclipse as seen from his camp location in Idaho and The Hubble Ultra-Deep Fields photo. The image shows almost 3,000 galaxies in a region 5-10 billion light-years away from us…all in the equivalent area of looking through a straw at one spot in our night sky. Absolutely blows the mind to think about it. He loves that. He says it reminds him that “I’m not the center of the universe.” 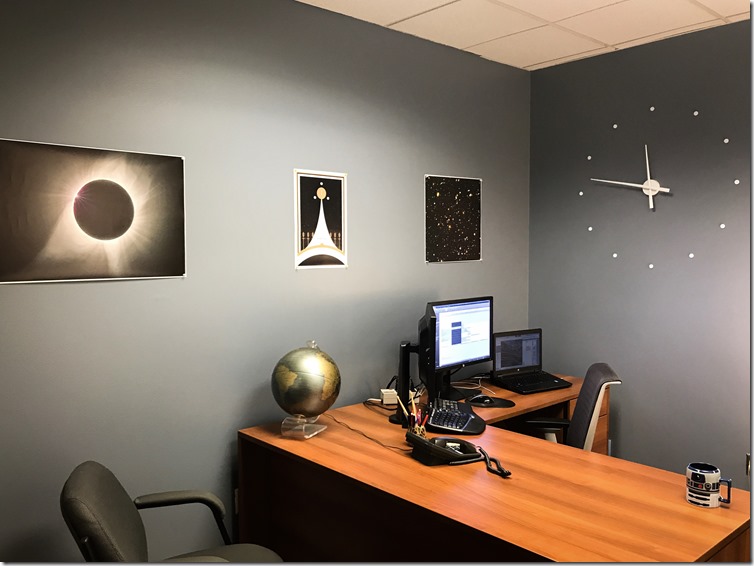 Oh! I almost forgot about his fourth wall. There is a white board on it and Rob insisted on hanging a large map of the Mullerthal area we hiked in Luxembourg (even though it doesn’t match the “theme”. I conceded haha).

When it was all finished, he realized how much better it will be to work in his new “space”.  People walk by and give complements and when they enter they always notice something fun to talk about. It’s a warm, comfortable, inviting office that can be a haven from stressful working situations. Congrats on the new orifice (oops, typo…) office, babe!