Rob here again with a weekend update. The last couple of weeks were busy with end of school year performances. Nate has been working hard the last few weeks to learn 6 pieces of music for his spring orchestra performance. Madeleine has been diligently preparing for her performance and eagerly waiting for news about her audition to perform for a Draper City Circus. See below for the details! Also, please excuse the vertical videos as I was not handling the video recording.

The six pieces of music that Nate learned for his end-of-year “Radio Hits” concert were Bohemian Rhapsody, All-Star, Bittersweet Symphony, Jersey Boys Medley, Dynamite, and Handclap. He worked hard to get back up to speed after missing so much school while he was sick. He was worried that he’d have trouble getting them all ready but successfully learned them all through diligent work and practice. The night of the performance we arrived early to get seats near the front and were rewarded with a great view of him in the first row of cellos. I’ve got a few photos, video, and audio clips for your enjoyment. We are so proud of him for working so hard and are happy that he has developed a talent that he enjoys and finds rewarding. I look forward to attending his performances for years to come.

A video clip of the performance.

Here is a clip of the Jersey Boys Song

Madeleine and the Aerobatics Team

Several months ago Madeleine got interested in silks and started taking lessons at a nearby circus school. She was immediately smitten with the sport and has progressed rapidly during a very short period of time. She is athletic, passionate, dedicated, and just a little obsessed. Our car rides home from the gym frequently revolve around the purchase of silks for home and how we are not going to install silks in the living room.

Julie and I support her passion and are very proud of her for working so hard. I’ve been nervous about injury as the kids swing their bodies around many feet above the floor; however, her and her classmates demonstrated very thorough and precise movements during the performance. It is clear the instructors take preparation and safety seriously and I can trust them to be as safe as possible.

She has auditioned and accepted on the Aerobatics team performing at an upcoming circus show for Draper City. She’ll be rehearsing for that twice a week all summer long. We can’t wait to see her in action during the performance. Well done Madeleine! 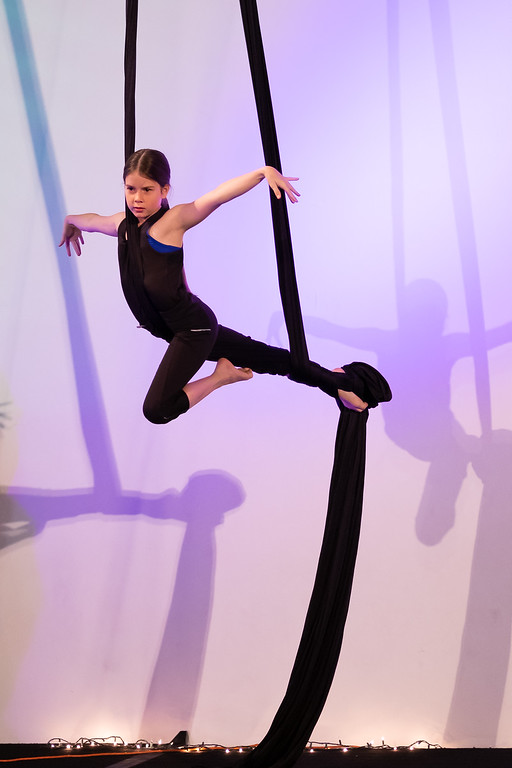 Here is a clip of her performance. We had trouble getting a clear shot because of the enthusiastic parent in front of us. Haha.