Day 12: After a quick breakfast in Alnwick we drove to Edinburgh… I mean Edinboooo. Granted, I wasn’t there long, but from what I saw I can say I’m not a fan. It’s just not that interesting, everything is grimy, it’s crowded with partying people (reminds me of Vegas that way), and we haven’t even met or heard anyone Scottish. Not even any of the museum, hotel, or restaurant employees are Scots.

Rob wrote, “My general impression of the city is that the main downtown area is just full of tourists and we didn’t see or hear many locals. It is very grimy and dirty and this is something I actually very much liked about the city…as I’ve been known to take photos of trash.”

To get off the streets we visited the National Museum of Scotland and that was really fun. It was more of a general museum, not solely Scottish, but it was big and had tons of interesting things to see.

Rob happily went back out to explore and take photos that evening, but I was happy to sit in our awesome hotel room and relax with the kids. I was hopeful that the rest of Edinburgh and other parts of Scotland made up for what Edinburgh lacked.

Day 13: After eating a huge and delicious free breakfast at the hotel we went to the Royal Botanical Gardens (since we missed the Hidcote Manor Garden in the Cotswolds). It was nice.

Our favorite plant was the “Hankie Tree” from China because the one-petaled white flowers are as big as handkerchiefs and hang down from the branches. When the petals fall, they float down and cover the ground. It’s pretty interesting to watch. 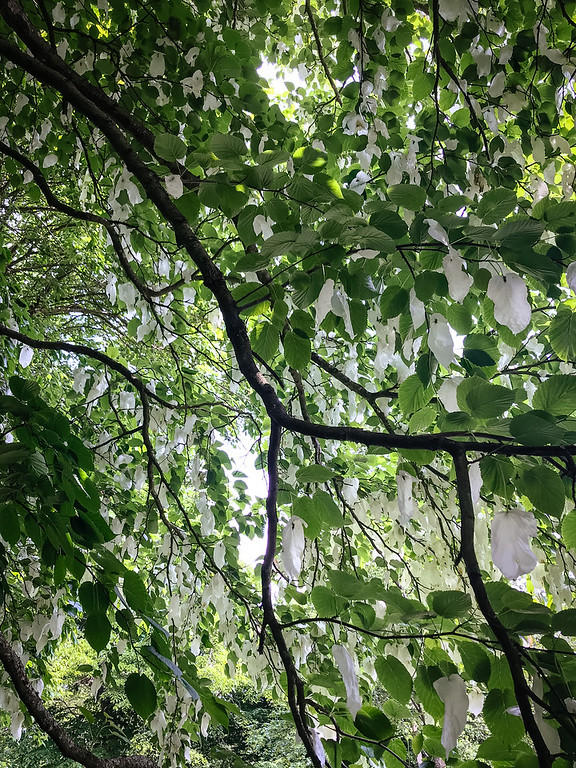 Cara didn’t feel too well here so she took quite a bit of coaxing to get through the grounds. She has a super sniffer and was barraged with the various plant scents the entire time. It overwhelmed her.

We then drove through two little neighborhoods in Edinburgh that are old and picturesque. They kind of are, at least. I don’t know, Edinburgh might be fun if you pub crawl, but otherwise it’s a pretty big letdown. We drove over the Firth of Forth on a triple cable stay suspension bridge and Rob loved it. 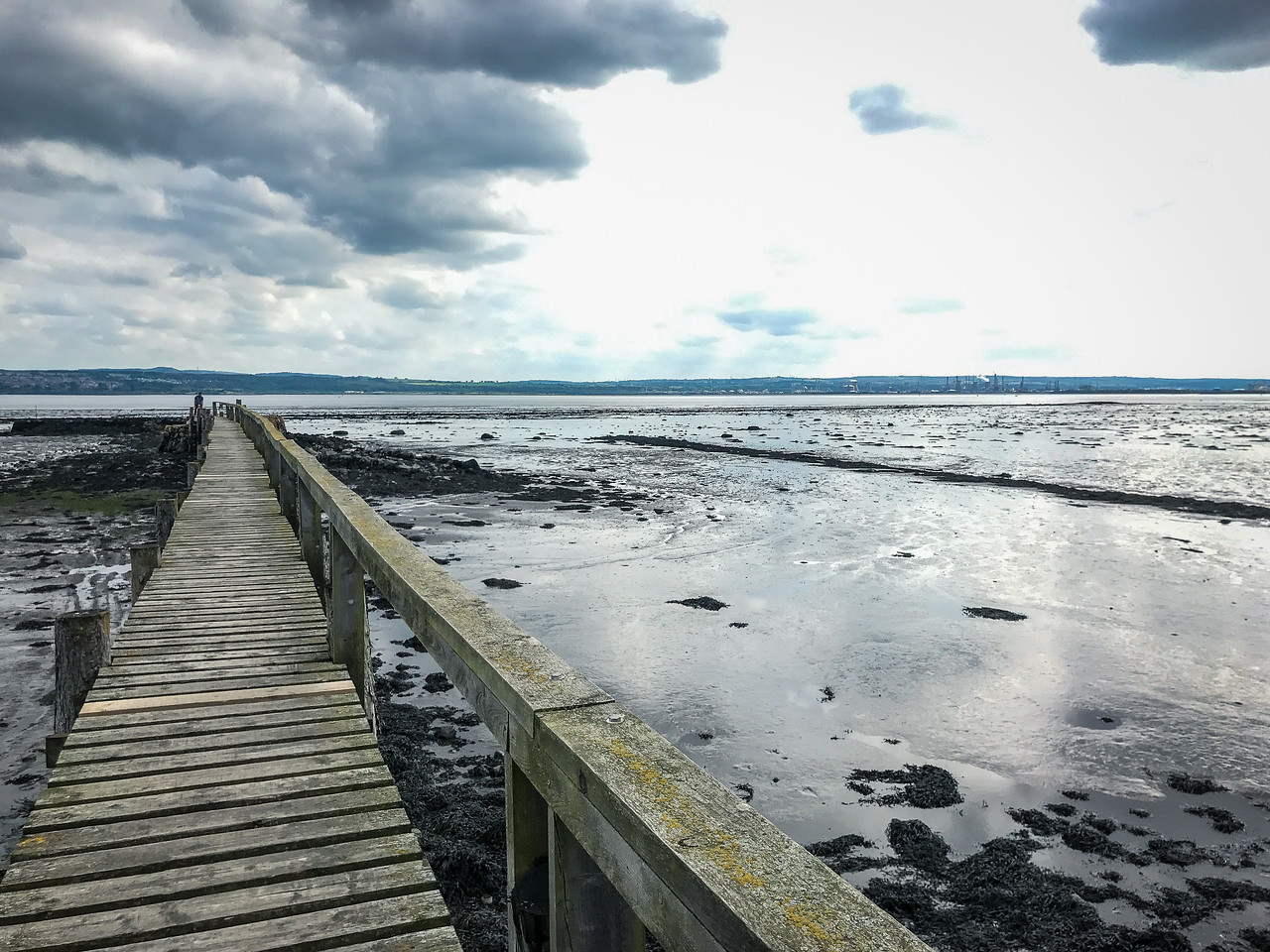 We stopped at another ancient village on our drive across southern Scotland (we didn’t have time to drive north). This one was tiny…only one street, but really cool. The girls loved playing on the playground while the rest of us took turns walking around and taking pictures. 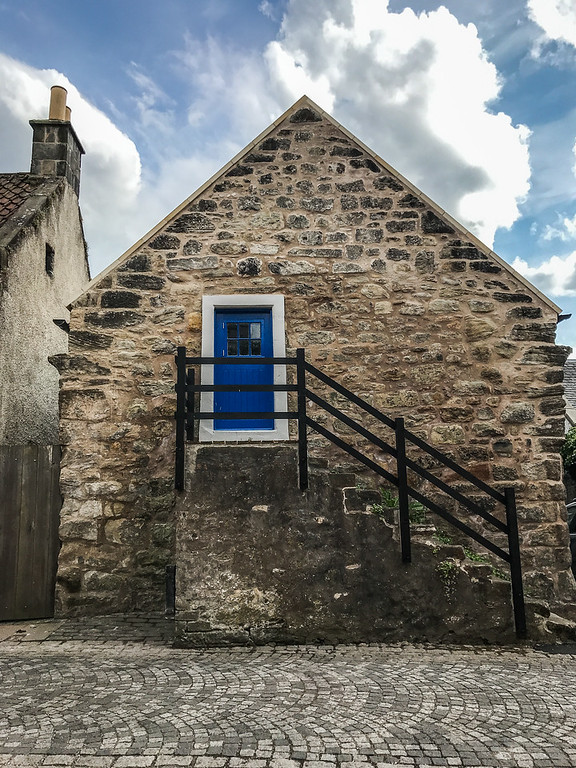 We ate in Stirling on the way to our cottage. Still hardly heard any Scots within earshot…where are they? They’re in Glasgow and London.

We finished the day driving up to our cottage for two nights in The Trossachs National Park. Upon arriving and exiting the car, the midges attacked. We barely made it into the house before they bit us to death!

Day 14: We finally ran into a few people with real Scottish accents on this day. Cool.

We did a couple of walks. The first was to Bracklin Falls. The water was low but it was cool enough. 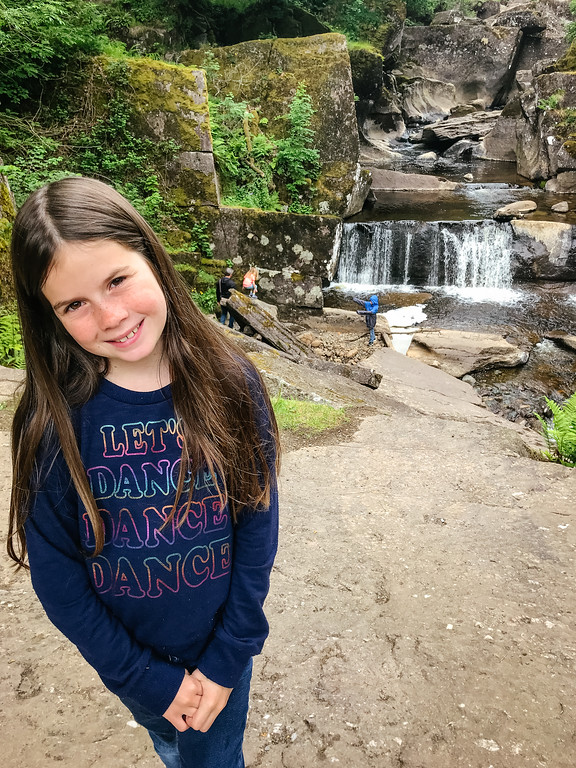 The second walk was to Finnich Glen (aka Devil’s Pulpit). We climbed down into a deep, jungle-like gorge and slot canyon area. The water is red, like blood. The green moss and ferns contrasted so well with the red mud and water. It is a stunning scene…a very, very cool spot. 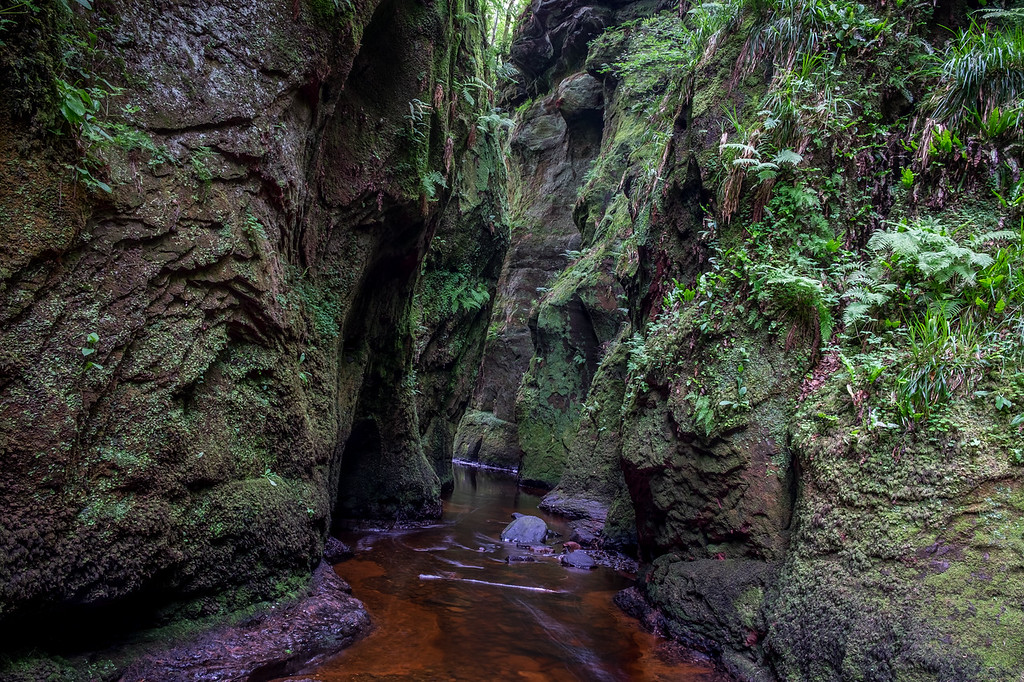 Rob wrote, “Perhaps my favorite outing of the entire trip was the walk and descent into Finnish Glenn and the Devil’s Pulpit. The hike down was treacherous on the moist and degraded steps placed so long ago…no one knows when! It was like being in a different world. The walls were so green with plant life and the water had a red hue due to abnormal mineralogy in the water. Being with my family in such a cool place will be among my most treasured memories with them.”

We then drove over the mountain back to our cottage. Rob made the mistake of stepping out of the car by a lake for a picture. Yikes!! The midges here are atrocious! They were unbearable, even with bug spray, except at Devil’s Pulpit ironically. 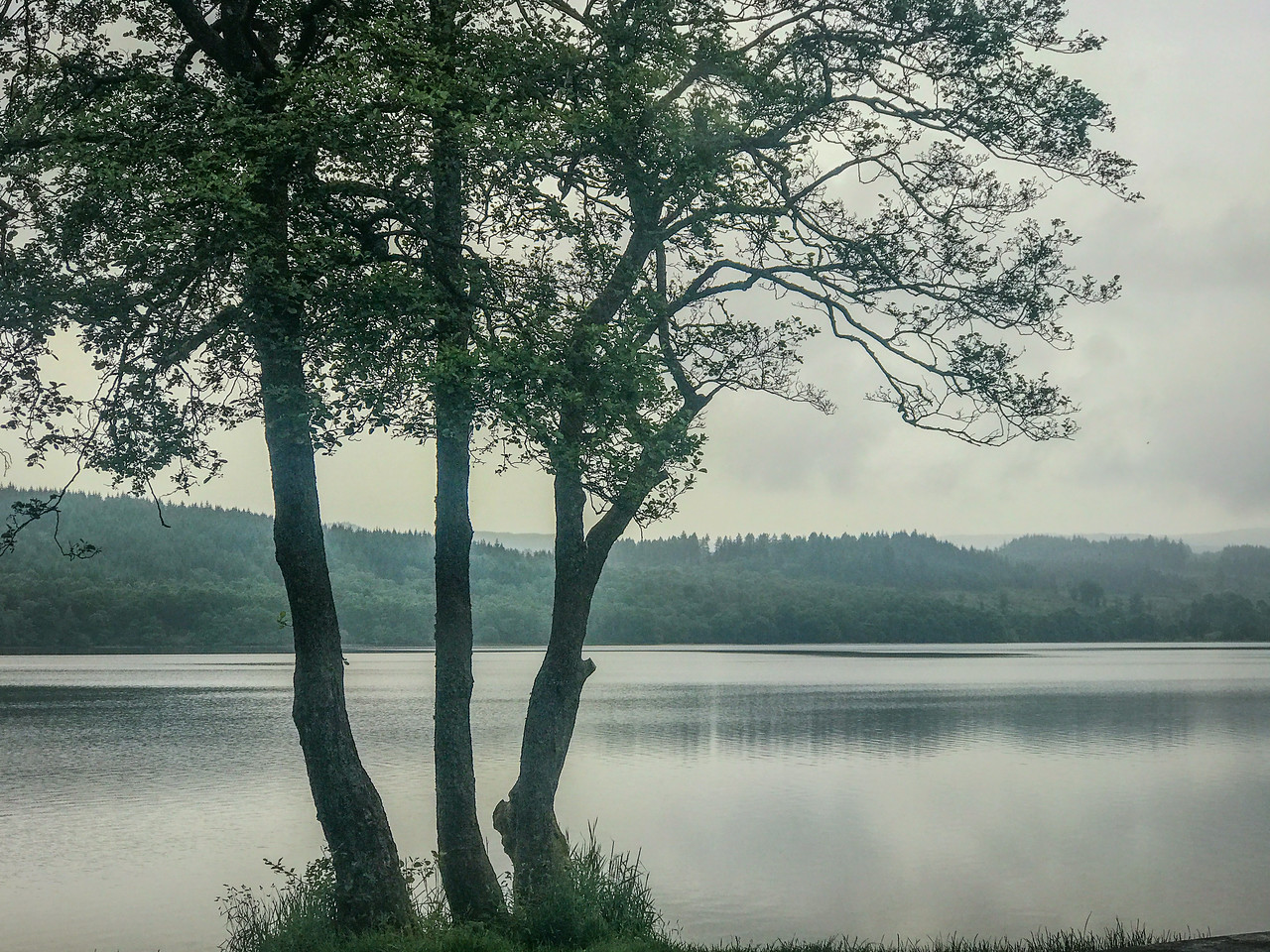 After stopping to visit the highland cows and buy souvenirs we pretty much saw and did everything we came here to see and do! I’d call it a success!! 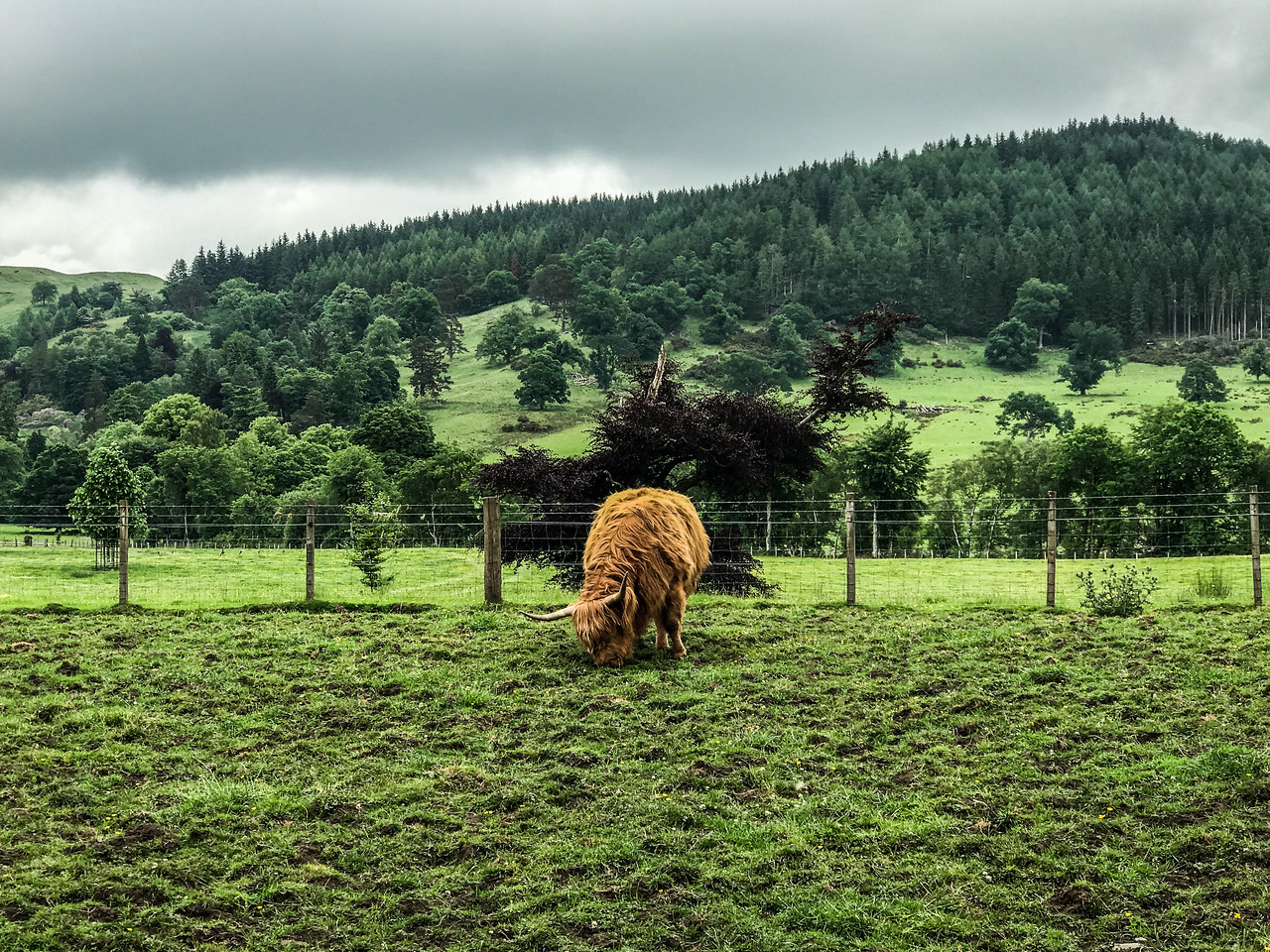 It looks like neither of us had the energy to write about Boston before now, so I’ll try and remember the highlights.

We only had a few hours in this cool city so we spent it in Beacon Hill. Boy, am I glad we stopped here. It was so beautiful, just as beautiful as any European town. I love classic style and there is nothing more classic than colonial brick. We wandered the streets, visited a few parks, and sat on a dock by the river before heading back to the airport. It’s definitely a city I’d love to explore more…maybe on a couple-only trip. That way, we’d really be able to soak it all in. As a side note, during this trip we managed to lose:

Well, at least our luggage was a lot lighter getting home. Sheesh!!

Here are our final thoughts on our British Isles road trip in one sentence from each of us: