We bought a firepit. Said firepit came in a box. Boy confiscated box. Many adventures ensued.

Then he used it as a roller coaster down the stairs!
(I got video of this on my phone, but I can’t figure out how to insert it here.)

After that, he punched holes in the box with my keys so he can see “stars” when he’s underneath camping.

Finally, it was a rock collector.

I’m a huge proponent of letting kids alone so they can develop their own imagination. It’s SO important for them to be able to go into their own adventures and explore and create. My kids are getting really good at it. They play pirates, airplane, hospital, Rapunzel, fishing, and many other things. They investigate and experiment. Sure, I could be right next to them guiding them the whole way…OR…I could let them be kids and not have them rely on me to entertain them. The second option is much more pleasing to me and the dividends are fierce for both me and the kids.

Two of my favorite children’s books are “Not a Box” and “Not a Stick” by Antionette Portis. “Through a series of paired questions and answers, the rabbit is queried about why he is sitting in, standing on, spraying, or wearing a box. Each time, he insists, “It’s not a box!” and the opposite page reveals the many things a small child’s pretending can make of one: a race car, a mountain, a burning building, a robot.” The same concept goes for the other book about a stick. 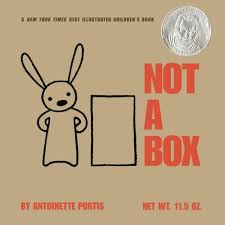 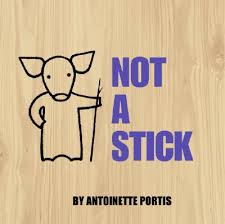 Nate wasn’t playing with a box. He was playing with all sorts of other things and having a fantastic time. In fact, that one box entertained him for most of the day. How wonderful is that? It didn’t even cost me a thing (except for what came in it).

Imaginations are powerful. Letting kids be kids is powerful. Some of my favorite memories ever come from my parents standing back and letting my brothers and sisters and I play. Just play. Good, old-fashioned, un-structured play. They didn’t intervene every two minutes. They even, dare I say, let us get hurt. Gasp! But you know, the occasional scrapes and bumps were overwhelmingly worth the fun we had and the memories we made.

So I say, let there be play!

One thought on “A Boy and His Box”